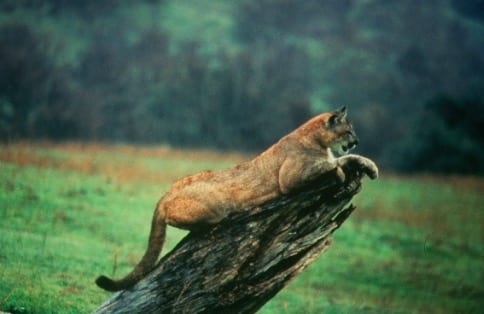 Birds gotta fly, fish gotta swim, and mountain lions gotta roam. Or as plant physiologist David Goddard once said, “No organism lives without an environment.” While we’ve protected large areas of open space in Ventura County through SOAR, the survival of wildlife in those open spaces is jeopardized by an inability to migrate. Wildlife, including mountain lions in the Santa Monica Mountains, need to connect to larger land areas for food and water, to find mates, and to establish their territory.

Unfortunately the major travel paths that link wildlife in the coastal mountains to large open space areas inland are becoming blocked-off. Impermeable fences, roads with high-speed traffic, new buildings, and the destruction of creeks that once provided safe passage, are causing wildlife to disperse into urban areas, inbreed, and be hit by cars. In fact, on average, a mountain lion a year is killed from vehicle collisions while moving to and from the Santa Monica Mountains.

To stem the increasing loss of wildlife, the Ventura County Board of Supervisors is moving forward to create a first-of-its-kind wildlife corridor zoning. The new zoning would help keep these important linkages from being blocked off. The zoning would establish standards in the corridors to protect creeks, reduce night lighting, limit impermeable fencing, and allow for clustering new development away from constricted corridors.

The inability to connect to larger areas of open space is a major reason why the lifespan of mountain lions is cut short from an average of 8-13 years in the wild, to only three years if they’re from the Santa Monica Mountains. That explains why at last count there were only 15 mountain lions left in the Santa Monica Mountains National Recreation Area, an area totaling 240 square miles. It is also why their survival as a species in this area is threatened.

However, we can help reverse that trend by being deliberative in siting development, using tunnels and bridges to prevent animal-vehicle collisions, and not blocking wildlife that use these critical corridors for their survival.

If you would like to show your support for this new Wildlife Corridor Zoning you can send an email to ClerkoftheBoard@ventura.org or better yet, attend the hearing at the Board of Supervisors meeting and let your voice be heard. For more information, go to https://vcrma.org/habitat-connectivity-and-wildlife-movement-corridors.

mountains, open space, recreation, ventura, wildfire, wildlife
Recent Posts
(c) SOAR
SOAR is a series of voter initiatives that require a vote of the people before agricultural land or open space areas can be rezoned for development. READ MORE
DONATE
NEWSLETTER
Copyright All Rights Reserved © 2018 • Designed by LoaCom
Contact Us

SOAR and the Growth of Local Land TrustsFrom the blog